Need for Speed Wiki
Register
Don't have an account?
Sign In
Advertisement
in: Vehicles, 2010s, Porsche,
and 13 more

It was introduced in 2011 with the same engine used in Porsche's S version with the difference of a revamped ECU and titanium-alloy turbines. Both upgrades improved the power output of the V8 engine up to 542bhp.

The Panamera Turbo S received a facelift in 2014 following the facelift of other variants in 2013.

The Panamera Turbo S appears in Need for Speed: Most Wanted (2012) following it being featured alongside the Aston Martin V12 Vantage in an official announcement screenshot.

It appears in the final release as a Grand Tourer class vehicle, which can be found in various Jack Spots in singleplayer. It is unlocked upon reaching a certain SpeedLevel in multiplayer.

Due to a quick acceleration, which is up to par with the V12 Vantage, the Panamera Turbo S is one of the most effective Grand Tourers for racing. Handling is another strong trait of the Porsche, since its steering has a lot of feedback and is thus useful for drifts. The body of the Panamera can withstand damage caused in pursuits well, too.

The Panamera Turbo S appears in the mobile release of Need for Speed: Most Wanted (2012) in the GT category.

It has a higher acceleration rating in the GT category, but suffers in handling. The vehicle can be purchased to the player's garage for $130,000.

The Panamera Turbo S 2011 appears in Need for Speed: Edge with an S class performance rating. 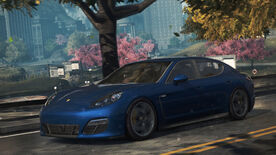 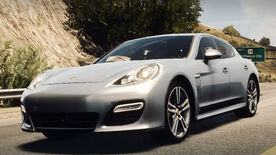