Need for Speed Wiki
Register
Don't have an account?
Sign In
Advertisement
in: Vehicles, 1960s, Nissan,
and 11 more

It was part of the Prince Motors Company's line-up until the company merged with Nissan in 1966, with following production years branded as a Nissan-Prince before ultimately becoming a Nissan badged vehicle in 1968, two years after the companies merged.

On May 3, 1964, Prince participated in the GT-II class of the second-ever Japanese Grand Prize with their Skyline GT (S54A-1). Over one hundred production units were produced to allow the car to qualify, with the competing car having its wheelbase extended by 20cm to make space for a 2-litre inline-6 G7 engine.

With #39 being driven by Yoshikazu Sunako, it was described as having very bad balance and its poor tyres meant for noticeable oversteer. Despite its shortcomings, all four competing Skyline GTs finished from second to sixth, with Yoshikazu Sunako in #39 taking second place, and Tetsu Ikuzawa in #41 in particular managing to maintain a single lap ahead of the event winning Porsche 904 Carrera GTS.

Being applauded for its ability during the GT-II event, the Skyline GT became a touchstone for Japanese developed cars with its saloon body and road focus momentarily out driving a purpose-built German coupé.

The Skyline S54B appears in Nissan Presents: Over Drivin' Skyline Memorial, a localised Japan release of Road & Track Presents: The Need for Speed for PlayStation.

Grouped in Class C, alongside the PGC10 and KPGC110, it can only be selected with white paint, although it can appear in red when driven by A.I. and split-screen opponents. 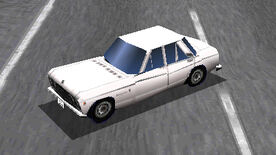