Pursuit breakers are objects which a player can hit in order to disable or disengage pursuing police vehicles in order to aid their escape. These objects can be found at fixed locations in many cities.

Players should be advised that hitting a pursuit breaker without a sufficient exiting momentum could result in their imprisonment within the resulting devastation. An example of this is if a player drives through a gas station pursuit breaker at a low speed resulting in them becoming embedded within the remains of the station's roof.

It is also possible to slow down and block racing opponents by hitting pursuit breakers. Hitting a pursuit breaker will trigger a short camera sequence that will show the actions of the pursuit breaker and the police units approaching it. The players vehicle will be temporarily controlled by an AI. It is possible that the AI will drive into a spike strip or other obstacles but this can be avoided if the player uses Speedbreaker as they trigger a pursuit breaker.

Pursuit breakers are shown on the player's Minimap and World map. They will not restore themselves until the player leaves the area and returns at a later period of time. 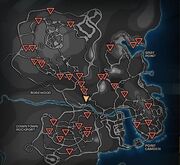 Retrieved from "https://nfs.fandom.com/wiki/Pursuit_Breaker?oldid=135522"
Community content is available under CC-BY-SA unless otherwise noted.