Need for Speed Wiki
Register
Don't have an account?
Sign In
Advertisement
in: Vehicles, Cars, Renault,
and 12 more
English

670 kg (1477 lbs)
Stub - Why not help by expanding this article with relevant information.

The Renault 4L, also known as the Renault 4 or Quatrellle, is a front-wheel drive hatchback manufactured by Renault.

Production of the car first began in 1961 and by the time it ended in 1992, over 8 million units were built.

During its lifespan, the 4L had its engine displacement increased up to 1.1L from 0.7L and its transmission to a 4-speed from the original 3-speed.

The 4L is featured in Need for Speed: Nitro as a class C Family vehicle. Players can purchase it for $10,000 from the beginning of the game. It is rated 2 in both handling and drifting; and 1 in strength.

A 4L with a unique livery can be unlocked as a Collectable Car for use in both Arcade Mode and Career Mode, once the player finishes the Bronze Cup Grand Prix in 3rd place. 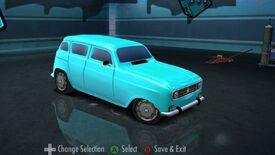 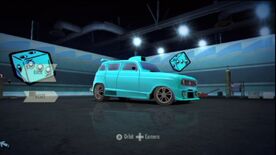 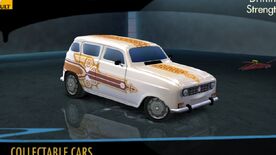