The Renault Clio V6 Renault Sport is a mid-engined hot hatch built between 2003 and 2005. It is a successor to the Renault 5 Turbo and uses a naturally aspirated 3.0L V6.

The Clio V6 first appeared in Need for Speed: Most Wanted. It is unlocked by defeating Blacklist racer number 13 - Vic and purchasable for $40,000 in any car lot.

The short wheelbase and mid-engine layout of the Clio V6 are highly useful in corners. It can turn significantly faster than the Toyota Supra and other larger vehicles without feeling loose at apex. It also has a quick acceleration.

However, the lightness of the Clio makes it less recommended for pursuits, although players can apply Speedbreaker to perform quick manoeuvres.

The Clio V6 also appeared in Need for Speed: Carbon as a Tier 2 Tuner car with a price tag of $50,000. Its unlock depends on the player's progression of the career mode:

The Clio V6 is arguably the best handling Tier 2 car in the game, beating the Mazda RX-7 and Porsche Cayman S. This trait does however come at the cost of acceleration and top speed; the Clio V6 might require upgrades to keep up on less technical courses such as Main Street. Players can use a Drafter such as Colin to improve its straight line performance.

The player must use a Clio V6 in a bronze tier checkpoint race of the Challenge Series.

The PlayStation 2 and Nintendo Wii releases of Need for Speed: Undercover feature the Renault Clio V6 as a tier 2 car with a price tag of $33,000. The car replaces the Renault Mégane Coupe seen in the Xbox 360, PlayStation 3, and PC releases.

Overall, the Clio V6 performs with quick acceleration and steering, which is as responsive as the Toyota MR2 GT-S's during any speed. It has a poor nitrous boost though. Top speed is 135 mph (217 kmh). The C class hits 165 mph (266 kmh) as maximum.

The Clio V6 is one of the most effective in-game cash purchasable cars as it's more powerful than similarly ranged cars like the Mazda MX-5. It is competitive in higher classes as well. 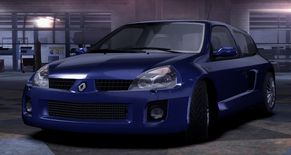 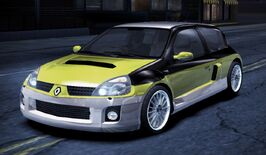 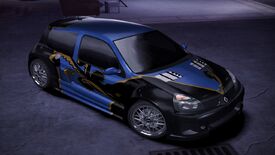 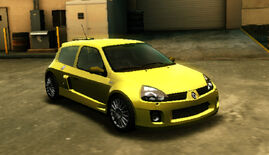 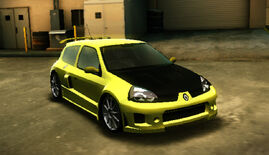 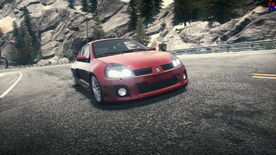 Need for Speed: Edge
Retrieved from "https://nfs.fandom.com/wiki/Renault_Clio_V6?oldid=140846"
Community content is available under CC-BY-SA unless otherwise noted.