Need for Speed Wiki
Register
Don't have an account?
Sign In
Advertisement
in: Vehicles, 2000s, Renault,
and 12 more

6-speed Manual
1,320 kg (2,910 lbs)
The 2008 Renault Mégane Coupé TCe 180 is the third generation hatchback in the Renault Mégane model range. It was officially presented in September 2008 alongside the 5-door model.

The Mégane RS was unveiled at the 2009 Frankfurt Motor Show.

The Mégane Coupé appears in Need for Speed: Undercover as a tier 3 car with a price tag of $65,500. The Job event "Nick of Time" must be completed to unlock the vehicle.

It is one of the slowest Tier 3 cars in terms of acceleration and top speed but it handles well.

It is featured in the Job event "Training Wheels." It requires the player to steal a black Mégane Coupé from a car showroom, lose the cops, and deliver the car to Zack Maio.

The Mégane Coupé is an unreleased car in Need for Speed: World.

It could be found in the game files of Need for Speed: World, but as it was not used, its mesh and texture files were removed in later builds of the game. 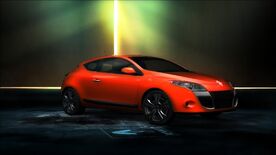 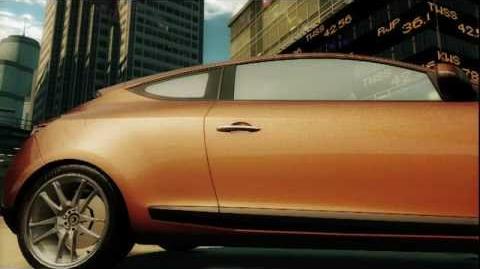 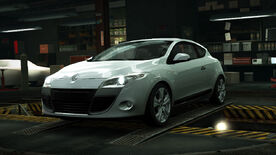