Need for Speed Wiki
Register
Don't have an account?
Sign In
Advertisement
in: Vehicles, 2010s, Fictional,
and 5 more

The S.W.A.T. Truck is used by the Fairhaven City Police Department and is almost impossible to takedown. It will pursue the player once they reach heat level 6 and can also be found in roadblocks.

It is strongly advised to not ram them while they are in roadblocks as they will certainly cause the player to crash, even when driving SUVs and trucks such as the Ford F-150 SVT Raptor. 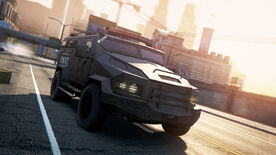