1350 kg (2976 lbs)
Stub - Why not help by expanding this article with relevant information.
The SEAT León Cupra is a front-wheel-drive hot hatch from SEAT which used the Volkswagen A platform for its first 2 generations (A4 and A5 platforms respectively).

While the first generation Cupra borrowed the 1.7L turbocharged I4 from the Volkswagen Golf GTI 1.8T (Mk4), the second generation uses its own engine (non Cupra R, Copa Edition).

In the Need for Speed series, the 2nd generation performance model is depicted with a 2.0L TSI engine with a 6-speed manual transmission. The second generation León Cupra has won many awards such as "GTI of the Year 2006-2007" in Greece.

The Seat León Cupra appears in Need for Speed: ProStreet as part of the Booster pack.

Being a front-wheel drive car, it is a good choice for Grip events, as it has excellent lateral grip when upgraded.

The Seat León Cupra appears in Need for Speed: Shift as a tier 1 vehicle. 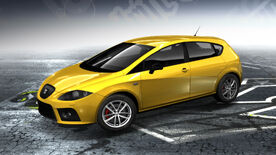 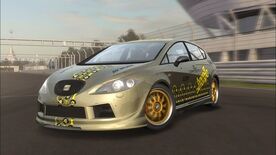 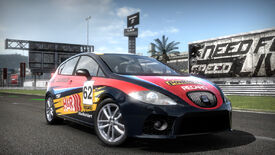 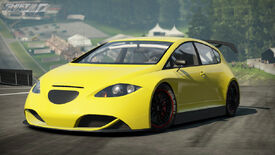