Need for Speed Wiki
Register
Don't have an account?
Sign In
Advertisement
in: Vehicles, Cars, Spectre,
and 12 more

Today, only 23 exemplars of the Spectre R42 exist as Spectre Supersport Ltd. soon became bankrupt after producing the R42. The Spectre R45 was introduced in 1998 as a successor to the Spectre R42. It was intended to be a limited production supercar.

The R45 has almost the same performance figures as the R42 and has a slightly redesigned R42 body as well, although the R45 never entered full scale production.

The Spectre R42 appears in Need for Speed III: Hot Pursuit in the form of an official PC download. It is by far the fastest class C car and is able to keep up with class B cars. 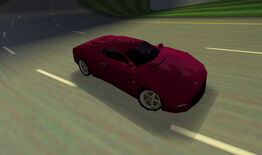