Need for Speed Wiki
Register
Don't have an account?
Sign In
Advertisement
in: Vehicles, 2000s, Subaru,
and 30 more

It was produced from 2006 to 2008. The GDB-F received a new front fascia, which is often called "pignose" or the "Hawkeye" model by car enthusiasts.

Unlike older WRX STI models, it was solely available with the 2.5L EJ257 Flat-4. The DCCD (Subaru Driver Controlled Center Differential) was also updated with this model.

The Impreza WRX STI appears in Need for Speed: Carbon as a tier 3 tuner class car.

It lacks acceleration and top speed, so much so that it is not very useful for sprint events, and does not have sufficient straight-line performance to evade police effectively, but does have great handling.

The stock Impreza WRX STI is unlocked for purchase in the Career mode depending on the player's chosen career path:

Once unlocked, it can be purchased from any Car Lot for 80,000 cash.

The bonus Impreza WRX STI is included with the Collector's Edition release and is available for use in Quick Race from the beginning of the game.

Yumi drives an Impreza WRX STI as part of the crew in the Career mode, if the player drives a tier 3 car.

The Impreza WRX STi is unlocked in the PlayStation Portable release of Need for Speed Carbon: Own the City after defeating Buddy, with a price of $74,000. It's also the car driven by the Corps' boss - MK.

The Impreza WRX STI appears in Need for Speed: ProStreet as a tier 3 car with a price tag of $29,000. It is unlocked at the beginning of the game.

Due to grippy handling and fast acceleration, the Subaru Impreza WRX STI can be a very useful Grip car during the early stage of the career mode, although it is also prone to understeer in corners. If the player installs performance upgrades on the car during this stage, it can easily outperform most of its rivals.

The Impreza WRX STI can be found in the game files of the PC, PlayStation 3, and Xbox 360 releases of Need for Speed: Undercover.

The model is fully customisable with the exception of any bodykits or refined performance, and the model has no damage state.

The Impreza WRX STI appears in Need for Speed: Shift as a tier 2 car with a price of $65,000. It is required to collect 30 Stars for unlocking the car. The WRX STI is capable of a Works conversion and has a Car Rating of 5.80.

The all-wheel drive system of the Impreza WRX STI provides good handling and acceleration, suitable for most race events in the career mode.

The Car Battle event at Autopolis GP features the Impreza WRX STI competing with the Lancer Evolution IX. It is also featured in a Time Eliminator event at Dakota GP.

The Impreza WRX STI appears in Need for Speed: Nitro as a Class B car. It is rated 2 in speed, acceleration and drifting; and 3 in both handling and strength.

A 2006 Impreza WRX STI with a unique livery can be unlocked as a Collectable Car for use in both Arcade Mode and Career Mode, once all stars are obtained in all Silver Cup events.

The Impreza WRX STI was made available Need for Speed: World on June 28, 2010 during the sixth closed beta session as a tier 2 car. Since August 22, 2012, it has been featured as a D class car.

The WRX STI was purchaseable for SpeedBoost, but has been unavailable in the car dealer since August 22, 2012. The in-game cash variant returned as of the January 8, 2013 update with the price of

Due to a poor nitrous boost and weak acceleration, that is comparable to that of E class cars, the WRX STI is one of the less effective D class cars for competitive multiplayer races.

Its weaknesses are balanced by a responsive steering; The WRX STI is fast in corners, but not as agile as the Mazda MX-5. Top speed is 148 mph (239 km/h).

Before August 22, 2012, it could only be purchased if the player was at Driver Level 15 or above and cost

The Royal Purple style is a unique cash car that cost

It is fitted with a unique Royal Purple engine and finished with a special Royal Purple livery. It was removed from the car dealer on August 22, 2012.

The Impreza WRX STI '06 appears in Need for Speed: Heat following an article published[1][2] on August 19, 2019, revealing it to be part of the game's official car list, and appears in the NFS: Heat Studio app as part of container 10, which was released on October 22, 2019. 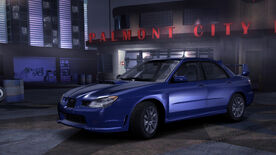 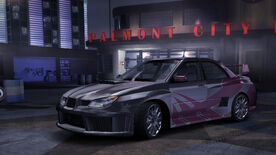 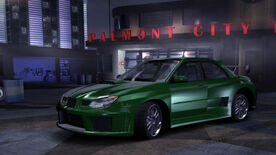 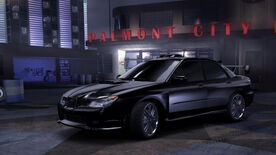 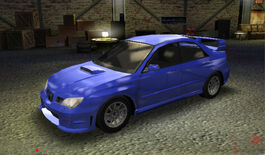 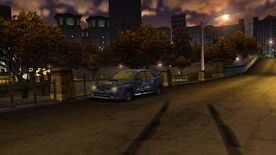 Need for Speed: Carbon - Own the City
(MK's) 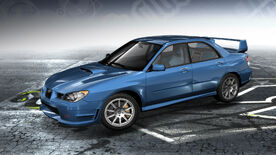 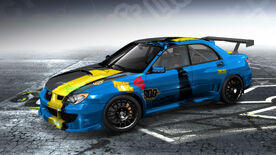 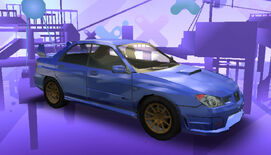 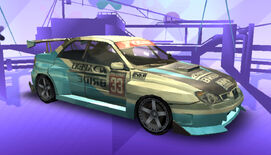 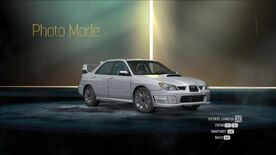 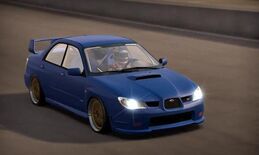 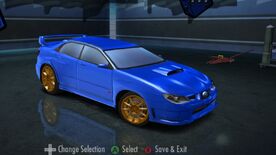 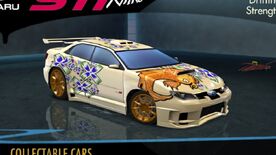 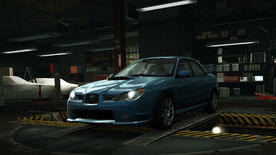 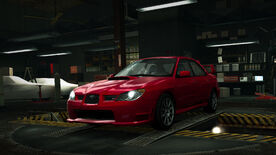 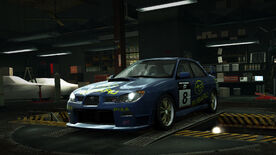 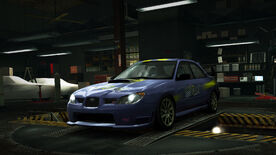 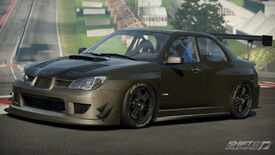 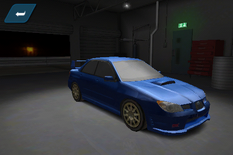 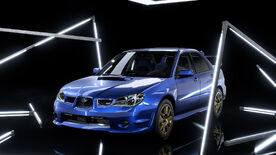 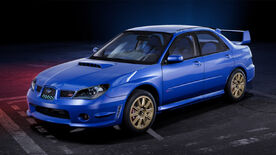