Need for Speed Wiki
Register
Don't have an account?
Sign In
Advertisement
in: Vehicles, Cars, Tesla,
and 8 more

It is the first production electric car to be powered with the use of lithium-ion batteries and the first entirely electric vehicle capable of travelling over 200 miles (320km) with a single full charge.

The Roadster was revealed at a 350-person invitational event at the Barker Hanger of the Santa Monica Airport, California on July 19th, 2006. It first appeared as part of an auto show at the San Francisco International Auto Show in November 2006. It later appeared at a series of other auto shows in Los Angeles, Detroit and Frankfurt.

1,000 Roadsters were produced by January 2010. It is also built using several components from different companies situated around the world. The body panels are produced by Sotira in France and sent to Hethel, England in order for Lotus to build the Roadster's chassis. The Roadster shares some components with the Lotus Elise such as the windscreen, air bags, a few dashboard parts and suspension components.

The gearbox is produced in Detroit, Michigan by BorgWarner. Brakes and airbags are manufactured by Siemens in Germany as well as some crash testing. All components are finally sent to Menlo Park, California for final assembly.

The Roadster appears in Need for Speed: Nitro as a class C electric vehicle and costs $75,000. It is rated 1 in speed; 3 in acceleration, handling' and drifting; and 2 in strength.

Jawad, the top racer in Dubai, drives a Roadster in all the location's Bronze Cup race events except for the Drift Challenge, Time Attack, and Speed Trap events.

Jawad's Roadster can be unlocked as a Collectable Car for use in both Arcade Mode and Career Mode, once all stars are obtained in all Dubai Bronze Cup events. 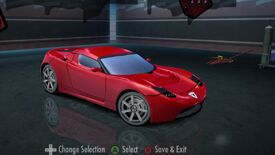 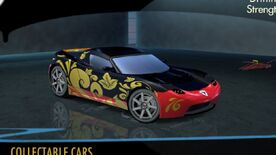 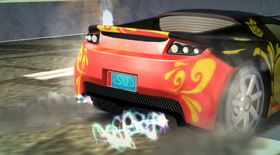 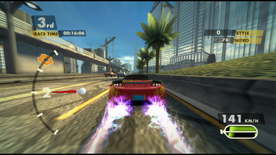