Need for Speed Wiki
Register
Don't have an account?
Sign In
Advertisement
in: Vehicles, 2010s, Tesla,
and 10 more

1-speed
1,235 kg (2,723 lbs)
The 2012 Tesla Roadster 2.5 Sport is a fully-electric sports car from Tesla Motors that is based on a Lotus chassis. It is an improved, altered, and refined variation of the earlier Roadster.

Production for the Roadster ended in 2012 after Tesla exhausted their supply of gliders developed by Lotus.

The Roadster Sport appears in Need for Speed: Most Wanted (2012) and was first revealed in a multiplayer teaser trailer for the game.

It appears in the final release as a Sports class vehicle. It can be found in various Jack Spots in singleplayer and is available upon reaching SpeedLevel 58 in multiplayer.

Similar to the Alfa Romeo 4C (Concept), the Tesla Roadster is an agile car with an emphasis on acceleration. However, it has the lowest top speed (120 mph/194km/h) in the game and a low pursuit durability. The long gears mod is recommended to make the Tesla Roadster more competitive in races.

The Roadster appears in the mobile release of Need for Speed: Most Wanted (2012) in the Sports category. Available for $40,000, the vehicle has decent acceleration and handling, but suffers in top speed.

The Roadster Sport 2011 appears in Need for Speed: Edge with an A class performance rating. 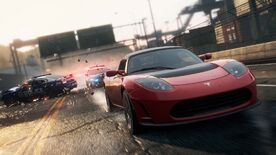 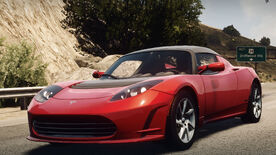 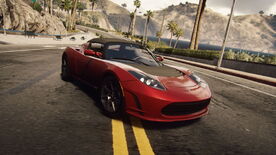