Unknown
The Tombstone is a fictional NASCAR inspired race car.

The Tombstone appears in the Special Edition release of Need for Speed II as a bonus car with a white and purple colour scheme.

To unlock the car, players must complete the Tournament Mode in either first or second place. It is also possible to unlock the car by entering the cheat code "tombstone" in the main menu. 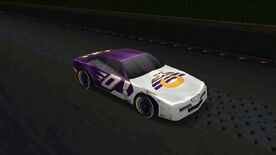