Need for Speed Wiki
Register
Don't have an account?
Sign In
Advertisement
in: Vehicles, Cars, Toyota,
and 33 more

The Toyota AE86 was produced alongside a non-pop up headlight variant, the Corolla Levin. The AE86 was also sold in Japan as the Toyota Sprinter Trueno GT Apex, albeit with slightly different specifications.

The Corolla GT-S is based on a light RWD platform and powered by a '4A-GE' entitled DOHC engine with 119bhp.

The AE86's affordability and driving traits made it a popular choice in motorsports and a favourite by car enthusiasts. In 2012, a modern reinterpretation of the AE86 was introduced which was jointly developed by Toyota and Subaru.

The Corolla GT-S appears in Need for Speed: Underground 2 and is available from the beginning.

Although it is the slowest car with standard performance in the game, the Corolla GT-S is also one of the best handling cars in the game. With upgrades, it can become competitive throughout the career mode. Once fully upgraded, the Corolla will also receive outstanding straight-line performance.

The Corolla GT-S appears in Need for Speed: Carbon as a tier 2 tuner class car available as part of various downloadable content packs.

The custom red Corolla GT-S is unlocked for use in Quick Race from the beginning of the game.

The custom white Corolla GT-S is unlocked for use in Quick Race from the beginning of the game.

The Corolla GT-S appears in Need for Speed: ProStreet as a tier 1 vehicle with a $16,000 price tag.

Given its light chassis and rear-wheel drive layout, the Corolla GT-S has notable handling characteristics: It responds quickly to steering inputs by the player and rarely loses grip. This makes the GT-S particularly useful in difficult race tracks and drift events as its handling makes long and smooth drifts possible.

The GT-S has moderate acceleration in consequence of a small four-cylinder engine, which delivers a low top speed and underwhelming performance when driving uphill but can be greatly improved with upgrades.

Players will find the GT-S to be most useful in Drift and Grip. It also fares well in Wheelie Competitions due to its low weight.

The Corolla GT-S appears in Need for Speed: Nitro as a class C vehicle and costs $55,000. It is rated 1 in speed, 2 in both acceleration and handling, and 3 in both drifting and strength.

Zarinah, the top racer in Singapore, drives a Corolla GT-S in all the location's Bronze Cup race events except for the Drift Challenge, Time Attack, and Speed Trap events.

Zarinah's Corolla GT-S can be unlocked as a collectable car for use in both Arcade Mode and Career Mode, once all stars are obtained in all Singapore Bronze Cup events.

The Corolla GT-S appears in Need for Speed: Shift as a tier 1 car with a 1.50 car rating and can be purchased for $18,000. It is capable of a Works conversion.

The Corolla GT-S is slower than any other tier 1 starter car in terms of power. However, this trait was compensated with a superior handling. it has a good acceleration and handling because of a low weight. Compared to more expensive D class cars, its acceleration might be lacking.

Players might find the Corolla GT-S to be a good choice for swapping their E class vehicle with a D class one. Similar to the Nissan Silvia (S15), it also fares well in higher classes, as long as upgrades are regularly applied. It is less useful in pursuits events due to its small chassis, although lower heat level events can be completed successfully.

Before August 22nd, 2012, it could be purchased at Driver Level 1 and cost

The Exclusive style is a promotional car offered to players that pre-ordered a copy of Need for Speed: World through the EA Store.

The Corolla GT-S appears in Need for Speed: The Run as a Sports class car.

Its inclusion was revealed by the official Need for Speed website on October 22, 2011.

The stock Corolla GT-S is unlocked upon the player beating 5 Solo Objectives in "Underground" Playlist.

The Need for Speed Edition Corolla GT-S is unlocked upon the player beating 12 Autolog recommendations.

The Corolla GT-S appears in Shift 2: Unleashed as a Retro Road class car with a D 100 performance rating and 1.97 handling rating. The GT-S can be purchased for $5,500 and can have its engine swapped with the 3.0 litre inline-six from the Toyota Supra.

The Corolla GT-S is a well balanced car with particular strengths in handling as it can easily enter and exit corners at a quick pace without losing grip. Due to its lightness, the AE86 will also have significantly improved acceleration with engine upgrades.

The Team Need for Speed Toyota Corolla GT-S is a special Retro GTX class variant that is rewarded to the player upon completing the Retro discipline. It is featured with an A 1510 overall rating and a 2.97 handling rating. 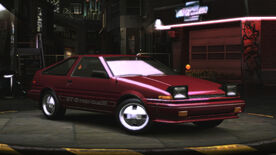 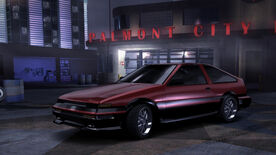 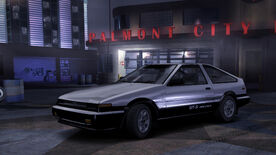 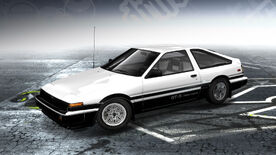 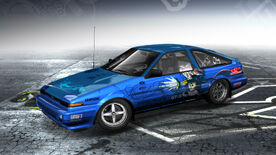 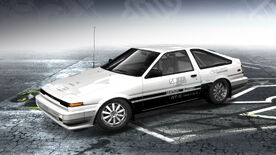 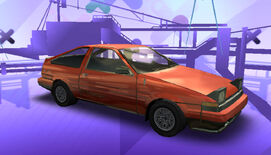 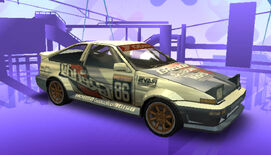 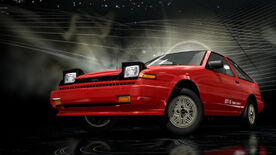 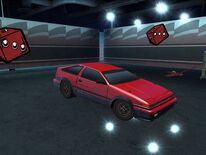 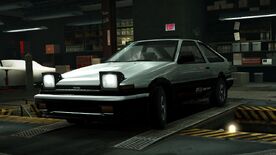 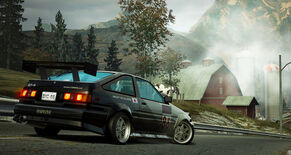 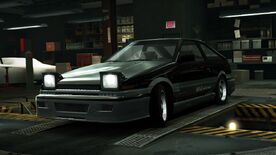 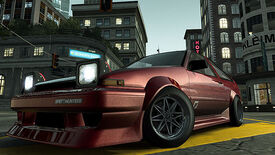 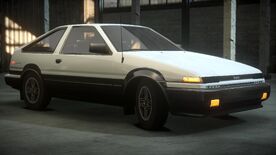 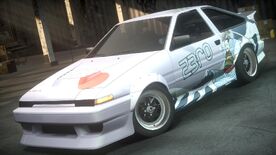 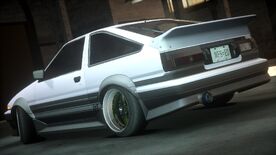