Need for Speed Wiki
Register
Don't have an account?
Sign In
Advertisement
in: Vehicles, 2000s, Toyota,
and 11 more

The 2002 Toyota Supra RS-Z (A80) is a coupe sports car manufactured by Toyota for the Japanese domestic market.

Although going on sale in May 1993, it was sold only in the Japanese domestic market from August 1999 onwards, with the final example rolling of the production line in July 2002 at Toyota's Higashi Fuji manufacturing facility in Susono, Shizuoka, Japan.

For the final three production years, only three trims level were offered and all were fitted with the 3.0-litre inline-six 2JZ engine: the naturally aspirated "SZ" alongside the two twin-turbocharged "RZ" and "RZ-S" trims.

The "RZ-S" trim was sold as the entry package for the twin-turbo 2JZ-GTE, with the more expansive "RZ" package including Recaro front seats, 17-inch wheels, and larger brake calipers.

The Supra appears in Need for Speed: No Limits as a classic sports class vehicle with a stock performance rating of 452.

Its blueprints were previously an exclusive item that was available only through the Tournament Store, before tournaments were removed.

The stock Supra RZ is a classic sports class car that requires 15 common blueprints to unlock. The blueprints required to unlock the vehicle can be found from various sources: 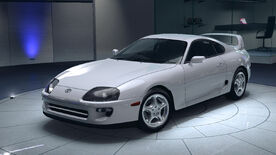