Need for Speed Wiki
Register
Don't have an account?
Sign In
Advertisement
in: Vehicles, 2010s, Triumph,
and 13 more

It was primarily aimed at the North American market, and the name Bonneville was chosen following Johnny Allen's multiple world speed records at the Bonnville Salt Flats with a Triumph-engineered Texas Cougar.

With the introduction of the "Modern Classics" range by Triumph in 2015, with the T120 being included of the six model lineup.

Production began in late 2015, with models being fitted with LCD lights alongside analogue dials and heated grips, it went on sale as capable and powerful recreation of a classic.

The Bonneville T120 can be found in the game files of Need for Speed: Heat, with various meshes, textures, and configuration assets present.[1] 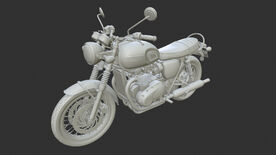