Need for Speed Wiki
Register
Don't have an account?
Sign In
Advertisement
in: Vehicles, Cars, Hatchback,
and 13 more

The SRi is a rebadged variant of the Opel Corsa GSi from Germany.

It was introduced as the fastest and highest priced model of the Corsa C range with a 1.8 litre engine, six-speed transmission, sport seats, and upgraded suspension components.

The Corsa 1.8 only appears in the Asian and European releases of Need for Speed: Underground 2, and is unlocked from the beginning of the title.

Being a small hatchback powered by a 1.8 litre engine, the Corsa is one of the quickest accelerating stage one cars with equally oustanding handling attributes. The Peugeot 106 is a very similar car, with smaller dimensions and better steering response, but has worse straight-line performance.

The Corsa's strength in acceleration is even more pronounced when upgraded with Extreme level parts, making it a top contender in that field and faster than the AWD-equipped Nissan Skyline GT-R from 0 to 100 mph. 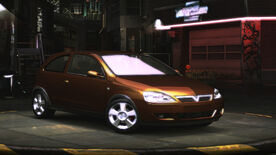