1677 kg (3697 lbs)
The Vauxhall Monaro VXR is a rebranded Australian V8 Holden Monaro sold in the United Kingdom under the Vauxhall brand.

Shortly before the VXR's production was ceased, a high performance VXR was introduced known as the VXR 500.

It has the same V8 as the standard VXR except it has been supercharged to generate 500bhp. It was replaced by the Vauxhall VXR8.

The Monaro VXR appears in Need for Speed: Most Wanted with almost identical acceleration, top speed and handling as the Pontiac GTO (2005), which is expected as they both share the same chassis design.

The two exceptions are the different engine noise and that the Pontiac GTO has a slightly higher top speed when tuned. It is unlocked after the player defeats Blacklist racer #10 - Baron.

In Challenge Series events #61 and #62, players have to drive a Monaro VXR.

Its acceleration is decent when upgraded, and it is also heavy, making it useful for pursuits, as it can easily ram police vehicles.

The Monaro VXR appears in Need for Speed: Carbon as a tier 2 muscle class car and is unlocked through differing means:

It is a below average vehicle in races as it lacks the powerful acceleration that the other tier 2 muscles have. It also has insufficient grip for twisty tracks. Although, its weight is useful in pursuits.

The Vauxhall Monaro VXR is an unreleased car that was going to appear in Need for Speed: World, and would have been featured as a B class car.

The Silver style is a rotationally available stock cash car that was never released. 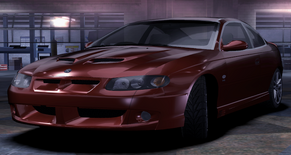 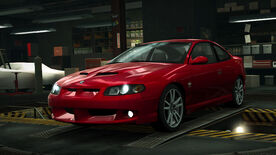 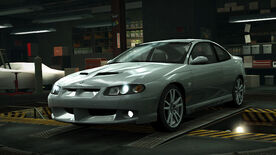