Need for Speed Wiki
Register
Don't have an account?
Sign In
Advertisement
in: Vehicles, Cars, Volkswagen,
and 11 more

The Mk4 GTI was introduced as a sporting trim with a wide range of engine configurations including an entry-level 2.0 litre inline-four and the top-ranging 178 bhp 1.8 litre turbocharged inline-four.

The Golf GTI appears in Need for Speed: Underground 2 and is unlocked after completing an URL event during stage three of the career mode.

The Golf GTI is the only stage three unlocked car to have less than 200 horsepower and thus is only capable of an average top speed. However, it is also featured with surprisingly competitive acceleration and decent handling even when fully upgraded. 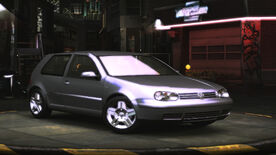