1344 kg (2963 lbs)
The Volkswagen Scirocco R is the high-performance variant of the Scirocco III model range, built since 2009.

Its suspension can be adjusted by the driver with the Adaptive Chassis Control system.

Like most new Volkswagen, the Scirocco R also comes with XDS, which works similar to a limited slip differential with the difference, that it uses the brakes to slow inside wheels, rather than limit power to them.

The Volkswagen Scirocco R appears in Need for Speed: The Run as a tier 1 car and is already unlocked at the beginning of the game.

Due to having its handling rated "Easy", the Scirocco R can be easily controlled by the player in corners. It also delivers a decent amount of power and is able to reach a good top speed.

The NFS Edition is awarded to the player upon obtaining a gold medal in every Windy City challenge. It has 520 bhp at 6,500 rpm. With a top speed of 190mph (306kmh), a 0-60mph time of 4.2s and a "Normal" handling rating, the NFS Edition is an averagely performing car.

The Dragon signature edition is a tier 5 car that is only obtainable as a rare multiplayer bonus wheel reward. It is capable of a high top speed (219mph/352kmh). Other performance statistics such as acceleration time and handling rating are taken from the NFS Edition.

The Volkswagen Scirocco R appears in Need for Speed: Edge. 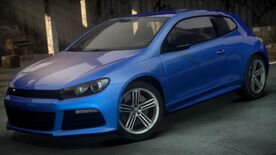 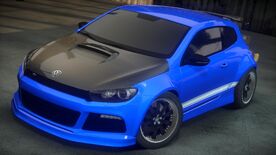 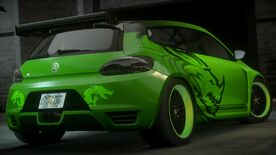 Need for Speed: The Run
(Dragon) 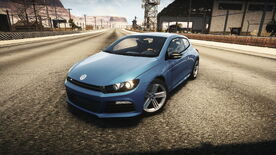 Retrieved from "https://nfs.fandom.com/wiki/Volkswagen_Scirocco_R?oldid=140895"
Community content is available under CC-BY-SA unless otherwise noted.