The second generation of the Volvo S60 was unveiled at the 2010 Geneva Motorshow, with production starting later that year.

The S60 T6 R-Design appears in Need for Speed: Edge. 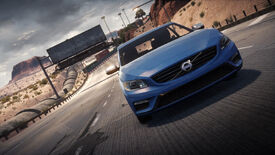 Need for Speed: Edge
Retrieved from "https://nfs.fandom.com/wiki/Volvo_S60_T6_R-Design?oldid=140900"
Community content is available under CC-BY-SA unless otherwise noted.